At Sea for 6 Days

Today we start 6 days at sea. There is no caching during this time, but there is lots to do.

Many say you must go nuts with all these sea days? I say it is all up to you, there is so much to do on the ship that you should not be board.
In my case I use a site called Cruise Critic and have done so for years. There you can find Cruise Critic groups for your sailing in advance of the cruise and post to forums and at the start of the cruise there is a Cruise Critic Party to get to meet people. I normally post who I am and what I plan on doing such as geocaching. I hope by doing this I can find a fellow cacher (s) that I may cache with while on the cruise.

During the first meeting on the first sea day I met people who decided that we would meet at around 4 PM daily at the Sunset Bar at the stern of the ship up on deck 15. We would have cocktails till about 6-7 PM where we would then head down for Sushi because most of us had late seating at 8:30 PM.

our daily view from the Sunset Bar

Yes it is rough. I have to say the weather was great for this crossing. We had great weather as far as transatlantic cruises go. The temps were between 24°C – 28° C.  We had some rolling of the ship but no problems for the majority of those on board.
We heard on day 4 of the cruise that the sister ship Celebrity Reflection was having 22 foot seas on the same course behind us by 1 day.

I will now include some photos from the different types of food on board.

pre-dinner cocktails just before dinner in the Molecular Bar.

There was veggies under the meat, carrots and you can see the green beans. The white is horseradish.

I have only shown some of the food. Trust me there is far more to a meal such as soup and salad.

On the Celebrity Silhouette there are many alternative”restaurants that cost extra. I tend to stay away from them but there was one that interested our group Qsine.
Qsine was offering 40% off the $45.0o per person for dinner.

There was 4 of us that went to dinner and it was a experience beyond anything I have seen before.
You walk in and the first thing you notice ios the chairs are different, some look like a Royal Throne, wine glasses are not typical wine glasses lying on the table on their side.

The menu is on a IPad and you go through the menu and there video’s to exp-lain menu items such as Sushi Lollipops. Find something you might want to make at home you can email it to yourself.
You select items that interest you and the waiter takes everyone’s IPad and looks at them and comes up with a game plan. It more or less becomes a tasting menu.

Table for two note the chair

our table for 4. note the wine glasses on their side

Chinese Spring Rolls – Note how they are served – in springs

Test Tubes of soup with a straw. Pastry servings below soup different flavours

Chicken Skewer – never did try any

This was Chinese Prawns – I gave up last course.

A sort of Rubik’s Cube to choice your dessert.

I am done – Food Coma

What do you mean I ordered dessert

There is more just before you leave. The Box of grass arrives. Those are covered Strawberries.

All I can say is they just keep bringing food till everyone waves their napkin as a white flag.
I was dead like two courses before dessert but they say you have to “try” dessert.
I could not eat breakfast or lunch the next day.

Now that we talk about breakfast and lunch there is a restaurant called the Porch on Deck 15 that serves Panini’s for breakfast and lunch. There is a $5 cover charge per person but you know it was well worth it. The view is over the starboard side of the ship from the top and is covered but outside. This a smaller venue so not all the noise either.

We tried the Porch both for lunch and dinner and it was a great change to get away from people.

The entertainment on board was hit and miss. We had some good entertainers such as the Beatles Tribute group from Liverpool England. A couple of Comedians both female and male with each doing a late night show for adults only.
I have found over the last several years there isn’t a great level of shows on board today that was several years ago.

The ships shows were hit and miss as the first night the two female singers were yelling into the microphones like they were competing against each other instead of complementing each other.

There was another venue on board called Cafe al Bacio & Gelateri deck 5 where you could get Tea or different Coffees with pastry or cookies.
This was a great start to the day to have tea/coffee in the morning while planning the day. have a few pastries with your beverage and all was good. I had the classic drink package so this was included in my package. The cost without the package was $3.00.
The tea was served in a China Tea Pot with Cup and Saucer.

I never did try the Gelato and didn’t see many people who did. I elected to wait till we got to Italy.

The one thing about the 6 sea days was the weather, it was simply FANTASTIC as I said above. The Ships Officers were fantastic during this time. There was pool volleyball several times during the cruise against the passengers. There was something called Dancing with the Stripes in the evening.
Captain Dimitrios Kafezis (Call him Captain Demitios – He is Greek you know – in case you didn’t know what launguage he speeks it is Greek and English – he is also 39 years and 24 months old) made himself available everyday from 11:15 to 12:00 by Cafe al Bacio on deck 5.
Captain Dimitrios was a great comedian too.
I have to say the theatre was almost full the day of his lecture on being a Captain and it was very informative.

During one of the sea days I attended a lecture on the Solar System given by a Cruise Critic member name of navyrotorhead. Fred’s talk was to overflowing crowds in the lecture room. I have to say I enjoyed this very much.
There was also a gathering up on deck 16 forward the last two nights of the 6 sea days to watch a Meteor Shower.
We all went up on deck just before midnight and all we counted was 3 meteors and 1 bird (suspected Albatross). Yes I said bird and we were two days sailing from land and he was still headed to sea.
It was Lisa who spotted the bird and I think she was scared to tell anyone because we would all think she was nuts. Lisa did finally say there is a bird up there and sure enough there was a rather big bird.
Either that or it was new type of drone.

I have to say the Cruise Critic Group on board was great. There are groups that are not so good then average ones then there are good ones such as this one.

As part of most Cruise Critic groups they arrange a Cabin Crawl where fellow passengers open up there cabins for a 1 -2 period and the Cruise Critic group breaks up into small groups and then visit the cabins.
On this cruise we had Inside cabins to Suites open to us. The Suites went over the top with wine and cheese and other canapé.
This gives you some idea what is good and what is not.

During these crawls there is often a Poker Run done.
One selects a card at the start and your initials are placed on the card and you will pick up 3 cards along the way then the last one at the end. One pays $5 at the start then the money is divided into 3 pots.  In this case it was the first and second winners and the worst hand.
My first card was an “8”.

view from a hump balcony cabin

deck chair behind me from previous photo

That is a huge Plasma TV – Celebrity Suite

another view of the – Celebrity Suite

At my second cabin I drew another “8” so I now held a pair and the high hand in our group.
At the third cabin I drew another “8” making 3 of a kind and still the highest hand in our group.
At the 4th cabin I drew a “3” still allowing me to have the high hand in our group.
We were the last group to arrive back at the Ocean View Cafe outside. The group was asked who had the high hand at 3 – 8’s. I was then told someone had 3 Aces and I looked to see a rather large smile on this guy. I now knew the competition.
I walked over to the table and the cards were laid out and I put my hand over the cards and said nope that isn’t a “8” and then moved to another card and said that is an Ace then moved to the next card and said yep this is a “8”. I reached down and picked up the card and turned it over. Well you can guess what it was, yes it was my 4th “8”.
So I now had 4 of a Kind and beat the 3 Aces. The look on the guy with the 3 aces was priceless. I imagine the look on mine was that of surprise.
I claimed the $95 for the win.

The winner of the Poker Run

Most cruise lines no longer have Galley tours “except” as a paid on board tour called behind the scenes at a cost of about $125 per person.
As part of of our cruise galley several tours were held. I attended one them just to see updates from the last time I did one several years ago.

this is what the meal is suppose to look like BEFORE leaving for the table. This is day 10 of a 14 day rotation. 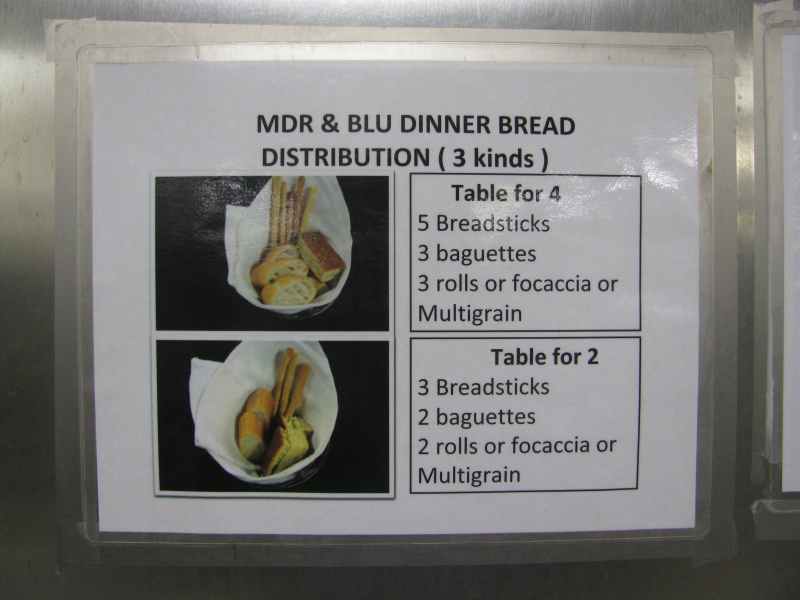 how the bread sticks are suppose to look

Each cruise line has it’s own repeaters group. On Celebrity it is called Captains Club. On this cruise they had to hold the parties on different days because there were so many Captains Club members on board.
I attended a couple of these parties which are held at different times of the day through out the cruise.

Did I mention this also includes free drinks? Not that it mattered to me because I had the drink package but still nice.

1 of the 6 sunsets while at sea

The next stop is Funchal Madeira Portugal.